More Than a Drawing 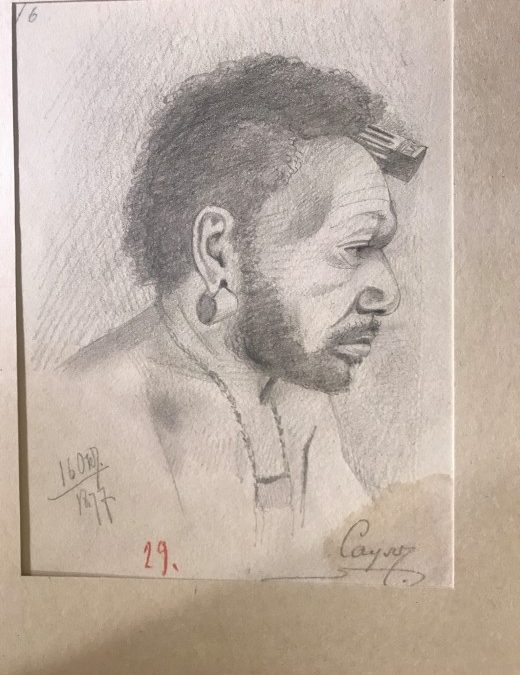 More Than a Drawing: How Nikolay Miklouho-Maclay’s Sketches Proved That Papuans Were Humans.

Political Science lecturer at the University of Papua New Guinea

Nikolay Miklouho-Maclay’s drawings of the natives of New Guinea proved that Papuans were HUMANS, not a mere link between Europeans and animals

“Link between Europeans and their animal ancestors” – Samuel Morton

On 23 November 2018, I had the rare privilege to hold in my hands original drawings of one man that for the first time argued that my ancestors, the Papuans, were humans and not intermediaries between animals and the Europeans as Ernst Haeckel put it. I was part of five young Papua New Guineans who travelled to Russia at the invitation of the Nikolay Miklouho-Maclay Fundation in St Petersburg. It is set up in honor of the Russian explorer and scientist of the 19th century, Nikolay Mikloho-Maclay.

Maclay popular in Russia as one of Russia‘s great explorer and scientist. But for Papua New Guineans, he is more than a scientist. He is a friend of the New Guineans. His drawings and diary proved to the Europeans that Papuans were humans, when the anthropological consensus among people like Ernst Haeckel and Samuel Morton was that blacks were a link between the Europeans and animals.

Ernst Haeckel argued that Australian Aborigines and their neighbors to the north, Papuans, were a mere link between Europeans and animals. In his popular book Natürliche Schöpfungsgeschichte (Natural history of creation, 1868) represents human species in a hierarchy, from lowest (Papuan and Hottentot) to highest (Caucasian, including the Indo-German and Semitic races). He was a Darwinist who popularized the recapitulation theory, an evolutionary theory of a historical hypothesis that assumes that the development of the embryo, from fertilization to hatching g resembles the human evolution. Papuans and the Aborigines were, according to these hypothesis, are the at the remotest stage of human evolution.

Samuel Morton categorized humans into five categories by analyzing 1, 000 skulls based on skull size or cranial capacity. Larger skulls or canal capacity, according to Morton proved intellectual superiority. Based on this method, he placed the Caucasian race at the top as intellectually superior and blacks as inferior.

Both Samuel Morton and Ernst Haeckel’s theories were later rendered controversial and of no scientific basis, and even racial (especially Samuel Morton’s work). However, in the 1800s to the 1900s, these views had substantial influence. It was at this backdrop that Nikolay Mikloho-Maclay set out to challenge these views.

More Than A Drawing

To some extent, these group of scientists argued that the scattered (spaces between hairs) hairs on these group of people demonstrated they were lost in transition from evolution animal kingdom to humans. One of the ways to counter their arguments, therefore, was to demonstrate that Aborigines and Papuans developed complete and normal hairs. In this sense, Maclay’s drawings depicting complete hairs of the natives of Rai Coast, Madang Province in Papua New Guinea were more than just sketches. These sketches disputed one of the evidence that the types of Ernst Haeckel relied on.

Nikolay Miklouho-Maclay made three expeditions between 1871 and 1884. The drawings he sketched are preserved in their original state at the Russian Geographic Society in St Petersburg, Russia. Nikolay Miklouho-Maclay arrived in Madang, present day Rai Coast in 1871, and settled among the people. He was an explorer, anthropologist, and a biologist. Living among the people, he realized that the Papauns, as all present day New Guineans were called at that time, were people. They had traditional structures, way of life, art, oral literature, and complex in their own way. He wrote extensively about them in his diary.

His drawing formed his strongest argument for Papuans humanity. He drew several pictures, depicting how Papuans‘ hairs developed equally. He befriended a local native named Tui. Tui had a son. Nikolay observed that hairs on Tui’s son developed equally. He concluded that Papuans were humans, equal as their European counterparts. They were not intermediaries.

“There is no superior or inferior race, all humans are equal by nature.”

His work began to spread across the scientific and anthropological community.

Leo Tolstoy wrote the following to him:

“You were the first to demonstrate beyond question by your experience that man is a man everywhere, that is, a kind, socialable human being with whom communication can and should be established through kindness and truth, not guns and vodka.”

Karamui, The Man from the Moon

The locals of Rai Coast, Madang still have oral accounts of Miklouho-Maclay’s time in Madang, PNG. Their grandparents gave Miklouho-Maclay the name Karamui – the Land from the Moon. He was the first white person to come to New Guinea and stay with the people. Because he was white, like the moon in the night, the locals called referred to him as the Man from the Moon.

Miklouho-Maclay made three expeditions between 1871 and 1884. In 1884, the first British colonizers and German plantation owners arrived, together with the Dutch, and divided the island of New Guinea into three parts. Europeans trades began forcefully recruiting the natives to work in their plantations, and Miklouho-Maclay’s attention turned to stopping these violations.

Ernst Haeckel & Samuel Morton: Were they just been racist?

Morton is widely considered the father of scientific racism, and his controversial ideas about the intellectual superiority of the Caucasian people provided a handy defense of the continued enslavement of African-Americans in the US just prior to the Civil War. Ernst Haeckel’s work is regarded by some scholars as one of the basis of the rise of Nazi Germany. Nikolay Miklouho-Maclay may not be well know among the ‘hall of fame’ artists, but if there are drawings in the 1800s that defended the equality of humanity, Miklouho-Maclay’s work is among those sketches. Macklay’s is more than just a drawing.

In part two of the article, we’ll see how his work contributed to ending ‘black birding’, a form of slave trading that was popular in the Pacific.