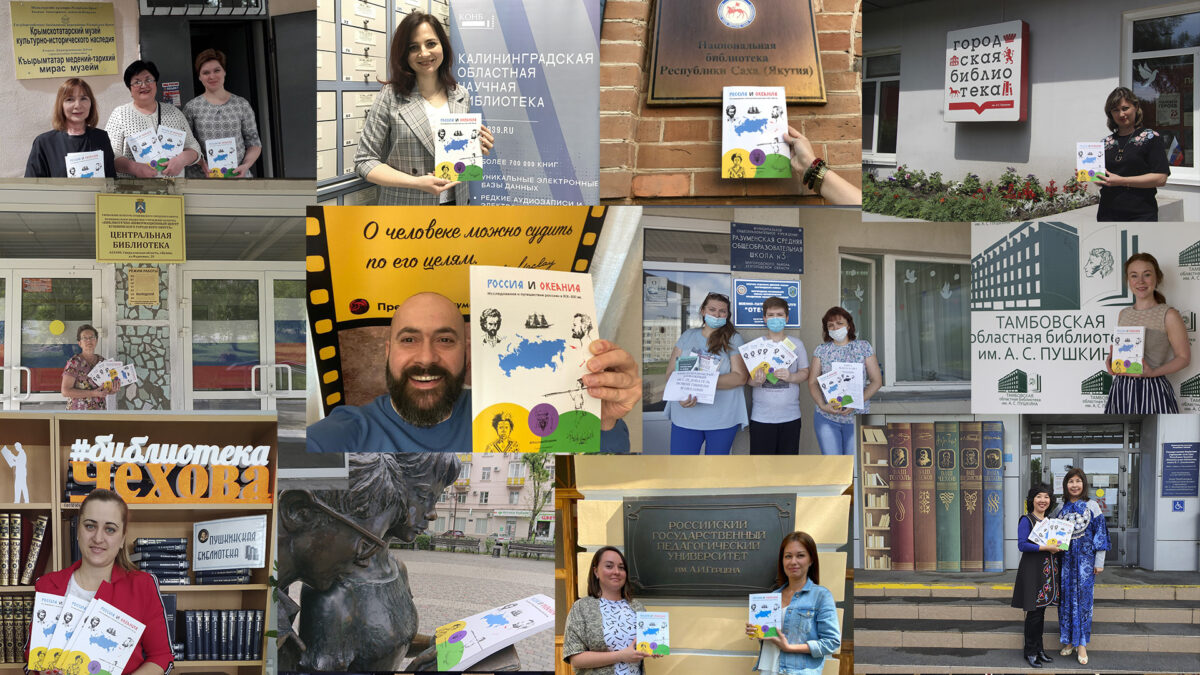 «The one, who knows exactly what to do, controls his fate ».

2020 was specific. COVID-19 affected many aspects of our life. But this year, the Miklouho-Maclay Foundation has not only realized its plans, but also reached a new international level with its projects! The Foundation has marked 2020 with the realization of many ideas, the most significant of which were the museum project “Maclay Coast” and the release of the second edition of the “N. N. Miklouho-Maclay Cololected Works” in six volumes, revised and expanded .

Here are the most vivid moments of the outgoing year.

For the Foundation, the year started with the continuation of the educational project “Russia and Oceania (XIX-XXI centuries)”, related to natural science and ethnographic studies of Russian scientists and travelers in the central and western parts of the Pacific Ocean. The project included exhibitions and lectures, and was designed for pupils and students. It served to broaden the horizons of young people and to introduce the younger generation to the achievements of our compatriots in the study of the South Sea region, and to the Russian names they had given to geographical objects in Oceania.

In 2020, the project was being implemented in Saint-Petersburg, Moscow and Veliky Novgorod region. It included lectures, films of popular science, and photo exhibitions. In total, the project covered at least 470,000 people during the year.

It is worth noting, that even the restrictions imposed in March across the country could not reduce interest in the project and stop its activity for a single day. Online lectures were streamed on social networks, as well as on the partners’ resources, having covered more than 135,000 viewers throughout Russia.

April 2020 was very intensive for the Miklouho-Maclay Foundation. At the beginning of the month, two documentaries directed by N. N. Miklouho-Maclay Jr. were premiered at once.

As a result of the project, the names given by Russian navigators to the objects they discovered appeared on the map. On the recommendation of the Russian Geographical Society, 71 toponyms identified by the Foundation were sent to the Federal Scientific and Technical Center of Geodesy, Cartography and Spatial Data Infrastructure, which is responsible for recording the names of geographical objects discovered or identified by Russian researchers, which will allow registering not only existing names, but also those given during the research of Oceania by Russians.

https://mikluho-maclay.ru/russkie-geograficheskie-nazvaniya-v-okeanii/ – link to the documentary and the project page, the Miklouho-Maclay Foundation website.

We hope that our initiative will inspire the creation of the World Map with the Russian toponyms, what was mentioned by the President of the Russian Federation Vladimir Putin in April 2018 at a meeting of the Board of Trustees of the Russian Geographical Society in Saint Petersburg. This will help to restore the history of world research evidenced by these toponyms.

“Journey of Papua New Guineans in Russia” – is a film-essay about the historical visit of Papua New Guineans to Russia, during which our friends discovered the homeland of the outstanding Russian humanist scientist Nikolay Miklouho-Maclay, who had made several scientific expeditions to the New Guinea Island at the end of the XIX century and debunked the myths of that time about Papuans. The film was broadcast on the Federal TV Channels and in social network, having covered millions of viewers.

https://www.youtube.com/watch?v=z0UNBm7u-EA – link to the film “Journey of Papua New Guineans in Russia”.

In the Spring 2020, the popular science publication “Russia and Oceania. Research and travels of Russians in the XIX-XXI centuries” prepared by the Foundation was released. It includes rare illustrative material and diary records covering an entire period from the first circumnavigation by I. F. Krusenstern and Y. F. Lysianskyi in 1803-1806 to the contemporary research expeditions to the New Guinea Island by N. N. Miklouho-Maclay Jr.

Moreover, the book contains the Russian names of geographical objects discovered by outstanding Russian navigators in Oceania, previously presented in the documentary. Some of them are still used today, while others, specified in the book, will become another step forward in preserving priceless monuments of the world’s historical, cultural and geographical heritage, a step towards restoring Russian toponyms on the World Map.

It should be noted that the publication was highly appreciated by the Institute of Education Development Strategy of the Russian Academy of Education and recommended as a textbook in secondary and higher educational institutions.

https://library.mikluho-maclay.ru/rossiya-i-okeaniya-issledovaniya-i-puteshestviya-rossiyan-v-xix-xxi-vv/ – link to the popular science publication “Russia and Oceania. Research and travels of Russians in the XIX-XXI centuries”.

In 2020, the printed editions were given free of charge to more than 70 educational institutions and libraries across Russia, from Khabarovsk to Kaliningrad, for educational purposes.

Ethnographer’s Day, traditionally observed on July 17, went over with a bang! TV program “Cultural Evolution” was broadcast for the whole country on the “Saint-Petersburg” TV Channel, featuring N. N. Miklouho-Maclay as a co-host.

26 November – 6 December 2020, the “Days of Papua New Guinea in Saint-Petersburg” festival took place in Saint-Petersburg for the first time in Russia. As a part of cultural program of the festival, a unique exhibition “Maclay Coast” was opened to the residents and guiests of Saint-Petersburg. The exhibition included thirty artefacts from New Guinea (bow, arrows, drum, etc.) of high historical and cultural value; photos and copies of drawings showing the history of relations began with the expeditions of N. N. Miklouho-Maclay in 1871; N. N. Miklouho-Maclay’s expedition costume of the XIX century (replica); “Maclay Coast” small-scale prototype, constructed in accordance with the archive materials, which demonstrated the first historical meet of the Russian scientist and the indigenous inhabitants of the New Guinea Island.

The unique prototype was just the beginning of the ambitious project, within the framework of which it was planned to build a hut on the Maclay Coast, a full-scale prototype of the hut in which Miklouho-Maclay lived during his first expedition. As a result of his research he proved that there were no superior or inferior races on earth, passing on the principles of humanism and equality of people to descendants.

Unique wild nature, exciting adventures, clash of civilizations and the opportunity to dive into the world of beautiful places inaccessible to the ordinary tourist are always interesting and attractive. All this is contained in the films of the Miklouho-Maclay Foundation “Maclay Returns” and “Asel Tui: Descendant of Tui”, directed by N. N. Miklouho-Maclay Jr. Before the official premiere, the films were broadcast on the VKontakte page in early December, having covered more than 600 thousand viewers in the first days!

The documentary “Maclay Returns” was broadcast on December 1. The film is about the adventures of the expedition led by a descendant of the great scientist and traveler 150 years after the first expedition of N. N. Miklouho-Maclay.

“Asel Tui: Descendant of Tui” was broadcast on December 2. This film is about the life of Asel Tui, an elder of the clan, on the Maclay Coast. His legendary ancestor Tui was the first who met the Russian scientist and considered him a “man from the moon” because of his white skin. The film contains a unique narrative about everyday life of people, which carefully preserve its traditions century by century, coexisting with civilization, which penetrates into all spheres of life.

In November-December 2020, the “Russian Academic and Cultural Luminaries and Their Worldwide Legacy” project of the Miklouho-Maclay Foundation took place. The main purpose of the project was to generate interest of citizens of ASEAN countries in learning the Russian language and getting education in Russia through acquaintance with the life and achievements of the greatest scientists and cultural figures of Russia. As part of the project, the world-famous Russians, N. N. Miklouho-Maclay and A.S. Pushkin were presented. The project was designed for students, progressive youth, teachers and cultural figures of Malaysia and Indonesia. This made it possible to increase the level of knowledge about science and culture of Russia.

The project included three online conferences that brought together Russia, Malaysia and Indonesia, and informational activities within which the informational materials were posted on the website and in social network, in English and Russian. The project PR support helped cover wide audience abroad.

https://cse.mikluho-maclay.ru/ – the “Russian Academic and Cultural Luminaries and Their Worldwide Legacy” project website.

At the end of the year, as a result of long-term hard work, the N. N. Miklouho-Maclay Collected Works in six volumes (second edition, revised and expanded) was released .

The edition was created on the base of the 1990-1999 edition. In order to do this, a thorough editorial and proofreading work was carried out to eliminate text defects and typos of the previous publication. Due to modern technologies, the colorful illustrative material was printed with a high quality, which is of great importance especially in ethnography, because every image detail matters. Electronic version of the Collected Works allows to preserve the unique material and work of dozens of outstanding scientists who worked on the compilation of the monograph in the 1990s, and provides free access to unique information that will be interesting to specialists and a wide range of readers.

Getting ready for 2021! We are sure that it will have even more unique and important projects, new meetings and people, and of course, exciting trips!