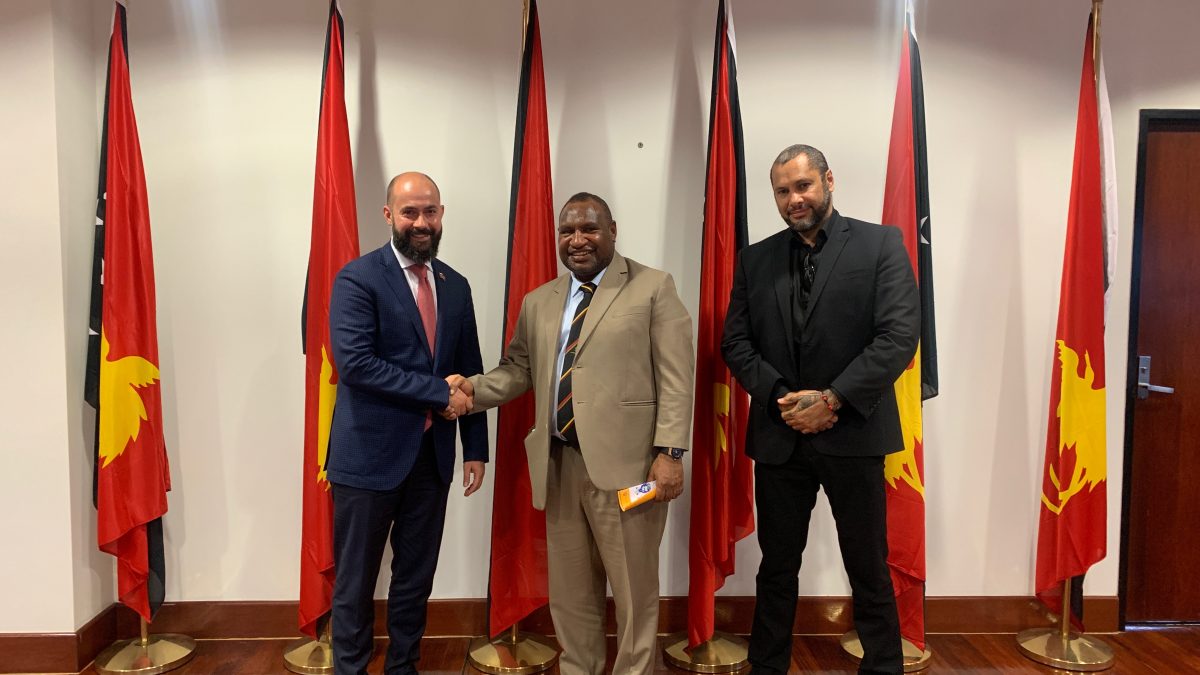 The Director of the Miklouho-Maclay Foundation met with the Prime Minister of the Independent State of Papua New Guinea in his office. Over the past years, the Foundation has been working towards enhancing and consolidating bilateral relations between Russia and Papua New Guinea in cultural, humanitarian and business areas. Despite his busy schedule, the Prime Minister spent over one and a half hours at discussing relevant issues with Nickolay Miklouho-Maclay, the descendant of the great explorer Miklouho-Maclay, who lived among the local tribes in the north-eastern part of the New Guinea Island 150 years ago, and subsequently championed their right for independence.

Miklouho-Maclay’s descendant, who heads the Foundation named after the famous explorer, is a staunch supporter of his humanistic ideas. He has been popularizing and arousing interest towards Papua New Guinea in Russia for several years. Over the past year alone, his Foundation has hosted exhibitions dedicated to Papua New Guinea, with the attendance exceeding 65,000 people. A documentary movie was also produced, entitled ‘The Man from the Moon’, broadcasted on Russia TV channel and seen by over 10 mln people. Owing to the Foundation’s efforts, a program The New Generation was launched, making it possible to bring 5 lecturers from Port Moresby and Madang to Russia for 10 days and introduce them to the country’s most illustrious cities, Moscow and St.-Petersburg, for the first time in history of our bilateral relations.

Currently the MM Foundation is presenting is new project entitled ‘Russia and Papua-New Guinea. Unity in Diversity’ in educational establishments and libraries of Port Moresby and Madang, aiming to provide more insight into the Russian culture and history for its young visitors. The project features canvas prints, mannequins dressed in traditional Russian costumes, as well as videos showing Russian folk dancing. Apart from cultural immersion, the visitors can explore opportunities for learning the Russian language and acquiring higher education in Russia.

Russian Culture Centers are scheduled to be launched by the end of 2019, the funding for which will be provided by the Foundation.

Apart from cultural and humanitarian projects, the Foundation is looking for opportunities for collaboration in the business sphere. A number of events were held in Russia to demonstrate the potential of investment into Papua New Guinea for Russian businessmen, among these events was the business meeting ‘Russia – Papua New Guinea. Prospects for Cooperation’ that took place in Port Moresby.

Nickolay Miklouho-Maclay presented the Prime Minister with very special gifts – unique Russian dolls in traditional costumes and his book ‘The Journey to the Maclay Coast’ (Rai Coast). During the meeting, the parties discussed relevant issues of bilateral cooperation. The Prime Minister pointed out that Papua New Guinea is a uniquely diverse country, bringing together thousands of languages and thousands of cultures within one land. ‘We are willing to observe and learn from the best practices of other countries, while preserving its unique national identity. We have a wonderful opportunity to identify the best trajectories of development across the globe and try to replicate these achievements. Our credo, ‘Friends to everyone, enemies to none’, supports our cause and mission. We are open to new proposals and cooperation with Russia, this powerful country that we can learn so much from’. The Prime Minister voiced his support towards the initiatives of the Foundation, that puts so much effort into promoting PNG’s image worldwide.

Nickolay Miklouho-Maclay pointed out that ‘The first research expedition launched in 2017 to the Rai Coast (Maclay Coast), in Madang province, with the participation of Russian scientists, changed my life completely. 3,000 locals from nearby villages gathered on the coast to meet the Russian travelers. They put up a Russian flag and sang a national anthem of Papua New Guinea. The locals have kept the memory of my great Russian ancestor for almost 150 years, passing this story from generation to generation. I was so touched by this cordial welcome that I felt compelled to tell Russians about this country and organized the events that gave them a chance to acquaint themselves with its unique culture. For me personally, as well as for many Russians, Papua New Guinea is a country that with have a special affinity with. Miklouho-Maclay’s diaries were published in millions of copies and read by generations of Russians. I consider this my personal responsibility to promote the positive image of Papua New Guinea, a truly exceptional and extraordinary country, including among Russian tourists, who will be undoubtedly coming to visit PNG in the near future. This time we came to Papua New Guinea on a tourist visa on arrival, the application process took no longer than 15 minutes. This is a new development, as previously the visa arrangement was quite problematic and challenging. It was during the meeting of the two Prime Ministers on the fringes of the APEC Summit 2018 that the bilateral relations were given a new momentum, which is bound to have favourable outcomes for both Russia and Papua New Guinea.