On October 25, VI Kruzenshtern readings were held in the Central Naval Library with participation of the Miklouho-Maclay Foundation.

The 90-minute documentary “The Man from the Moon” premiered. 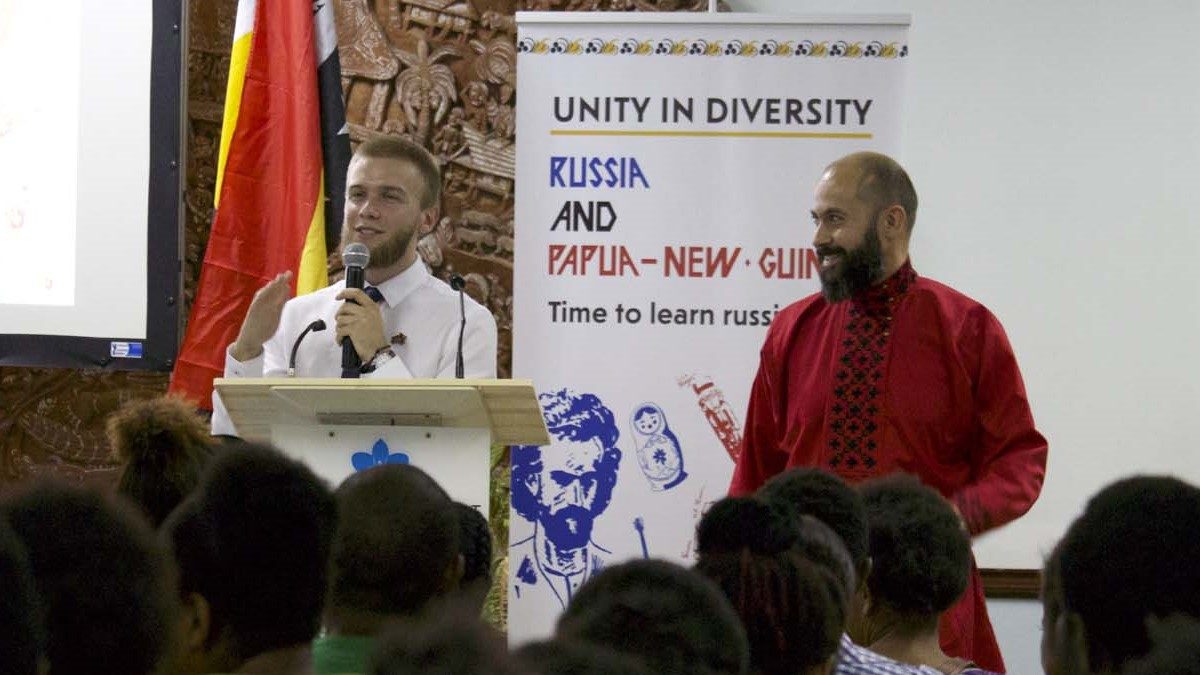 Starting from October 2019, the Mikluho-Maclay Foundation launched a new project entitled ‘Russia and Papua New Guinea. Unity in Diversity’, with the support of the Ministry of Education of the Russian Federation. Events will be held at major educational establishments in Port Moresby and Madang. The project aims to provide more insight into the culture and history of Russia, give visitors a chance to explore educational opportunities that Russia has to offer and encourage them to start learning Russian on a regular basis.

The exhibition ‘Russia and Papua New Guinea. Unity in Diversity’ represents a unique cultural event, the first one of its kind to take place in Papua New Guinea. In the run-up to the event, the Director of the Mikluho-Maclay Foundation, Nickolay Miklouho-Maclay, met with James Marape, the Prime Minister of the Independent State of Papua New Guinea. At this meeting, N. Miklouho-Maclay spoke about cultural activities scheduled to take place as part of this project – the initiative that was welcomed and endorsed by the state leader. As the Prime Minister pointed out, ‘Our national credo is ‘Friends to everyone, enemies to none’. We are open and eager to collaborate with everyone who comes with good intentions, and such events help us gain a better understanding of this great power, which is undoubtedly highly beneficial for the strengthening of bilateral relations between our two countries’.

The exhibition aims to shed light on the Russian ways of life and retraces the history of bilateral relations between Russia and the Independent State of Papua New Guinea that were established around 150 years ago, in the course of the expedition launched by an outstanding Russian scientist and explorer, N. Miklouho-Maclay, to the northeast of the New Guinea Island. To this day, Papua New Guineans cherish the memory of this great pathbreaker, transmitting it from generation to generation.

In the time the exhibition is on display, lectures and tours are given daily, twice a day, providing visitors with basic knowledge about Russia.

Lovileen Gibilen, a law student from the University of Papua New Guinea, shared her impressions about the project: ‘Personally, I really liked this project, as I remember learning about Miklouho-Maclay back at high school, it was so incredibly exciting! I would love to go to Russia, would love to see the famous Russian ballet dancers. I adore the Russian language and would like to learn it, too. This project gave me a chance to gain more insight into the Russian culture, language, and people. Russian is my favourite language and I admire Russians. This has been such a great experience for me, I look forward to visiting Russia someday’.

As Artyom Garin, Mikluho-Maclay Foundation lecturer, noted, the visitors were extremely excited to learn more about Russian culture and traditions. ‘People of all ages visit the exhibition daily, from schoolchildren to the elderly. Lots of things come as a surprise to them, they were particularly impressed to find out, for example, that temperatures in Russian towns range from -30° С during winter to +30° С in summer, and that it would take a week-long train journey to cross the country from east to west, and the sun never sets on its huge territory’.

The visitors were also astonished to discover that Russia is home to over 200 different nationalities and there are 13 languages of instruction, despite the fact that Russian is the official national language. By contrast, there are over 800 languages in Papua New Guinea, whereas the instruction is in English only. Many visitors were surprised to find out that over 300 mln people speak Russian worldwide. All those interested to learn Russian will have a chance to attend Russian language lessons delivered by the St.-Petersburg State Transport University instructors, available both in a classroom and online format, with the organizational support of the Mikluho-Maclay Foundation.

It is indeed evocative that the official opening ceremony of the project ‘Russia and Papua New Guinea. Unity in Diversity’ took place in Madang, where the famous scientist and explorer, Nickolay Miklouho-Maclay, carried out his ethnographic studies. Over 200 people attended the opening ceremony, most of them students and faculty staff members of the Divine Word University in Madang. During the event, over 140 students signed up for a Russian language distance-learning course.

In his welcome address, N. Miklouho-Maclay pointed out: ‘I believe it is of paramount importance that the intergenerational links are sustained and safeguarded, and personal relationships evolve into bilateral relations on a national level. This indicates that there is substantial potential for long-term cooperation, as it is primarily built upon respect and friendship that was born as far back as 150 years ago’.

As Sir Peter Barter observed, this project represents a mutually beneficial event for both countries. ‘Papua New Guinea and Russia share a historical bond, that is why the Mikluho-Maclay Foundation’s initiative opens up new opportunities for discovering Russian culture and traditions, as well as for learning the Russian language. I am so pleased to witness these efforts taken towards the strengthening of our bilateral relations, giving us a chance to learn more about each other’s cultures’ – Sir Peter Barter added.

Exhibitions were also opened in Port Moresby at the leading University and the National Library and Archives of Papua New Guinea. Within a few days, over 1,500 people attended the exhibition and over 600 of them signed up for Russian language lessons, which will be delivered by the St.-Petersburg State Transport University instructors on a regular basis until the end of 2019.

During the opening ceremony at the National Library of Papua New Guinea, the Director of the Library, Kakaito Kasi, pointed out that joint cultural events are of great educational benefit for Papua New Guineans, expanding the horizons of their knowledge and global cultural awareness, encouraging them study world history and cultures of other countries and peoples.

Paul Fleming, pro-vice-chancellor of UPNG, opened the ceremony and noted that the exhibition is impressive in its diversity, giving the students a unique chance to see authentic traditional costumes displayed on custom-made mannequins, watch videos and attend lectures – all within one venue. This project is one-of-a-kind opportunity to delve deeper into Russian culture and gain knowledge, invaluable for a well-rounded young person.

Many guests of honour attended the opening ceremony at the University, including a PNG MP Gary Juffa. In his welcome address, the Papua New Guinean political leader stressed the particular similarity that cultures of Russia and Papua New Guinea share, despite the huge distance separating them. ‘Such exhibitions illustrate how much alike our nations are and encourage us to adopt the best practices that Russia, this great power, can offer’ – Mr Juffa added.

As Nickolay Miklouho-Maclay, the Director of the Mikluho-Maclay Foundation, rightly noted, it is the first event of this kind that aims to acquaint Papua New Guineas with Russian culture since the great voyage of the eminent explorer, N. Miklouho-Maclay – that is, since the 19th century – and it is a great occasion to start rediscovering each other’s cultures for mutually enriching experience.

Upon completion of the project, the exhibits will be donated to the Universities of Port Moresby and Madang, as well as the National Library of Papua New Guinea, with which the Mikluho-Maclay Foundation has been successfully collaborating in recent year

The project ‘Russia and Papua New Guinea’ will undoubtedly enable thousands of Papua New Guineans to gain more insight into Russian culture and history and will subsequently be incorporated into the permanent display of Russian Culture Centers established on the territory of the largest state in Oceania – Papua New Guinea.