The exhibition ‘Russia and Papua New Guinea. Unity in Diversity’ was designed to showcase the diversity of Russia and retrace the history of its bilateral ties with the Independent State of Papua New Guinea, dating back to the 19th century and originating from the expeditions of the great Russian scientist and explorer N. Miklouho-Maclay to the New Guinea Island. The exhibition also aims to highlight the importance of learning the Russian language, demonstrate the potential of educational opportunities in Russia and showcase Russian traditions and culture.

fill out a form

Canvas prints displayed at the exhibition will acquaint visitors with various aspects of life in modern Russia across all major domains. Russian history and culture are portrayed through the national architecture and the art of building, traditional arts and crafts and ethnic costumes of indigenous peoples living in its territory. Nature is represented by seas, forests, rivers, lakes and mountain ranges. Wildlife and vegetation are represented by endemic species and unique flora and fauna included in the Red List of endangered species. Modern Russia is portrayed through its architecture and industry, as well as the greatest achievements in all spheres of human endeavor. The official motto of the Independent State of Papua New Guinea is also perfectly relevant for Russia, with its uniquely diverse nature, culture and national identity.

Events will be held in:

Traditional dress of a Russian male peasant from the Vologda province, XIX century. The dress consists of a side-opening kosovorotka shirt made of blue canvas with hand printed designs in indigo, red striped pants, a woven sash, onuchi – linen leg wrappers, a pair of bast shoes called lapti, a woven bast pester’ – traditional large rucksack-type basket worn on the back, and a felt hat known as grechnevik. The name of the latter stems from a popular Russian ‘fast food’ snack of the XIX century, a small buckwheat cake cut out from a pre-readied mixture with a drinking glass and pan-fried in oil.

The costume of a XIX-century Russian peasant girl from the Novgorod province consists of a calico chemise with a square-cut yoke running around the shoulders and wide cuffed sleeves with trimmed hems. The pinafore-style sarafan and kerchief are made of printed cotton fabric replicating the designs of the so-called ‘baranovsky’ calico fabrics, extremely popular among peasants at the time. They would sometimes be referred to as ‘English’ or ‘French’ in different parts of the country, owing to the fact that back in the early XIX century they were imported from overseas.  Such fabrics couldn’t be produced within the household, but only bought or bartered at the local market. From the mid-XIX century onwards, when the national textile industry started rolling out affordable high-quality calico fabrics on a commercial scale, factory-made textiles – or ‘manufaktury’, as they were called in those days, – were brought into common use and became widely popular throughout the country.

Collection of doll mannequins, created for the project ‘Russia and Papua New Guinea. Unity in diversity’ presents traditional peasant costumes modelled after traditional dresses worn in north-western provinces of the Russian Empire at the turn of the 19th-20th centuries. The design and cut of the clothing, as well as accessories, faithfully replicate authentic fabrics, shapes and technologies of those days.

Two male costumes with silk shirts decorated with cross-stitch embroidery. Only well-off peasants from north-western provinces could afford such silk clothing, keeping themselves busy with vigorous trade along northern sea routes and therefore exempt from serfdom. The handmade sash is executed in the diagonal weaving technique known as ‘polutkanye’, or ‘halfweaving’ from bright wool threads.

A male peasant costume with a bleached homespun linen chemise, decorated with an archaic red-and-white pattern executed in the so-called ‘branoye’ weaving technique, in which a small shuttle-type wooden plank is used to separate wefts and warps. The hand-woven sash is made on a reed frame – a weaver’s tool designed for making belts. Striped pants are complemented by ‘onuchi’, or leg-wrappers, along with miniature handmade birch bark shoes, or ‘lapti’. The ‘grechnevik’ felt hat is made of dark brown wool.

Winter costume of a girl from the Arkhangelsk Province donning a fur hat ‘kaptur’, decorated with handmade embroidery in gold on a velvet fabric adorned with rhinestones and mink fur. The sarafan dress is made of silk black-and-blue fabric decorated with jacquard pattern. The fur coat is edged with mink fur and decorated with orange and purple jacquard fabric, following the fashion trend of the time.

Costume of a girl of marriageable age of the Petersburg province with a shirt with embroidered “Richelieu” sleeves and gold lace cuffs. Sundress is made of brocade – a rich patterned jacquard fabric with metallic threads, decorated with gold lace. Headwear – “cherka”, tiara or “koruna”, beaded and decorated with rhinestones in the technique “sajenie po beli” (embroidery with white beads on cotton cord).

Costume of “povyazochnitsa” of Archangelsk province is called so due to its headgear – high maiden headband, decorated with metallic lace, embroidered with beads on a thick foil and ribbons. Shirt with wide muslin sleeves made of the finest fabrics are complemented by elegant upper shoulder brocade dress – a short fur coat or “dushegreya” (means soul warmer). Unlike other costumes, the main detail of the clothing is skirt. Shoulders covered with bright red scarves “alovitsi”.

Holiday women’s costume with sundress of rare handmade fabric of indigo color with floral patterns. Shirt is made of crimson satin – fashionable at that time purchased material. Front of the shirt is made of plaid ‘pestryad’ (homemade motley striped linen fabric). This shirt can be worn with belt without sundress on haymaking – special labor holiday. The costume is complemented by a bright calico apron.

The collection of dolls-mannequins is designed by the workshop “Slavutnitsa” specifically for the project “Russia and Papua New Guinea. Unity in diversity”, created by the Miklouho-Maclay Foundation with the use of the grant of the Ministry of Education of the Russian Federation. 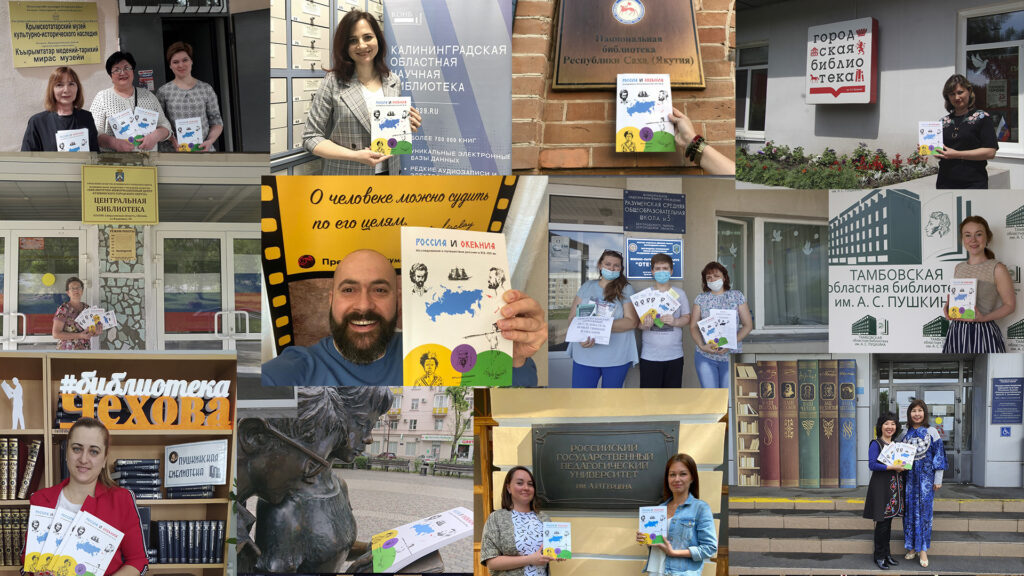