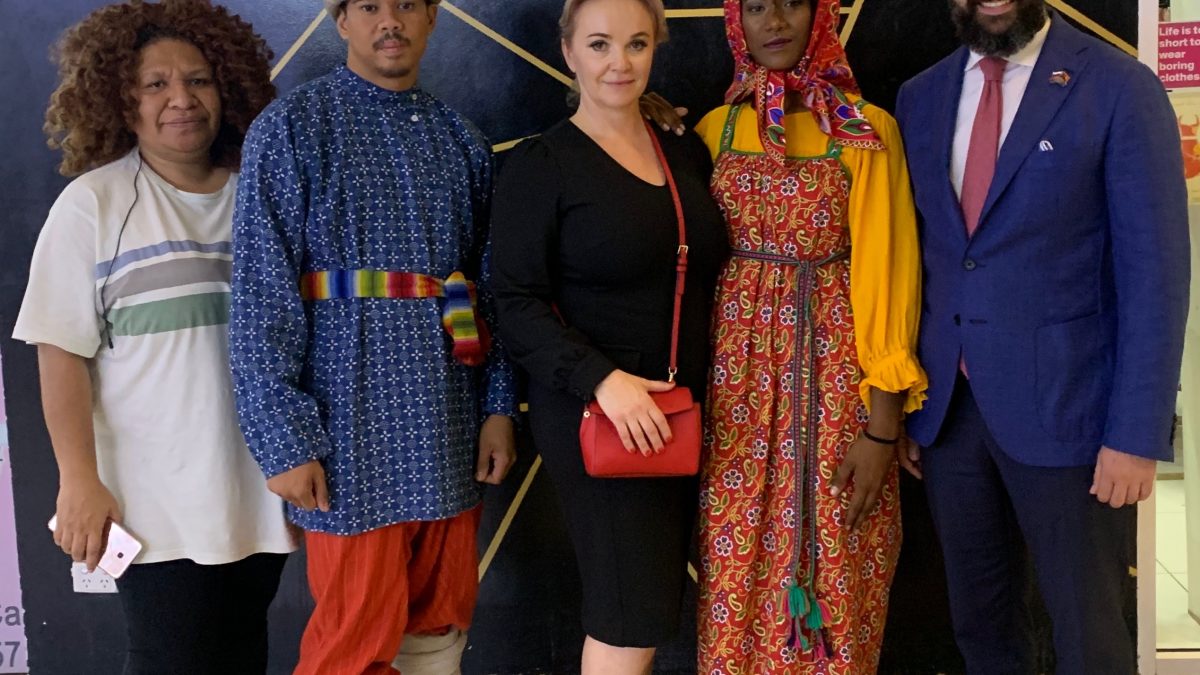 The Miklouho-Maclay Foundation pleased to present the new project ‘Russia and Papua New Guinea. Unity in Diversity’, which is going to represent Russia at PNG Fashion Week.

The core part of the exhibition is displayed at Universities in Port Moresby and Madang, as well as the National Library and Archives of Papua New Guinea. The exhibition, a unique cultural event, features photo canvas prints showcasing Russian culture and history, a collection of doll mannequins and traditional Russian costumes of the 19th century. Much like Papua New Guinea, Russia is exceptionally diverse – something you can see for yourself when you visit the exhibition and the fashion show.

At PNG Fashion Week, the Miklouho-Maclay Foundation would like to show you part of the featured exhibits – traditional dresses of Russian 19th-century peasants that were custom-tailored for this project from authentic fabrics that have been traditionally used in Russia.

Traditional dress of a Russian male peasant from the Vologda province (the 19th century) consists of a side-opening kosovorotka shirt made of blue canvas with hand printed designs in indigo, red striped pants, a woven sash, onuchi – linen leg wrappers, a pair of bast shoes called lapti, a woven bast pester’ – traditional large rucksack-type basket worn on the back, and a felt hat known as grechnevik. The name of the latter stems from a popular Russian ‘fast food’ snack of the 19th century, a small buckwheat cake cut out from a pre-readied mixture with a drinking glass and pan-fried in oil.

The costume of a 19th-century Russian peasant girl from the Novgorod province consists of a calico chemise with a square-cut yoke running around the shoulders and wide cuffed sleeves with trimmed hems. The pinafore-style sarafan and kerchief are made of printed cotton fabric replicating the designs of the so-called ‘baranovsky’ calico fabrics, extremely popular among peasants at the time. They would sometimes be referred to as ‘English’ or ‘French’ in different parts of the country, owing to the fact that back in the early 19th century they were imported from overseas.  Such fabrics couldn’t be produced within the household, but only bought or bartered at the local market. From the mid-19th century onwards, when the national textile industry started rolling out affordable high-quality calico fabrics on a commercial scale, factory-made textiles – or ‘manufaktury’, as they were called in those days, – were brought into common use and became widely popular throughout the country.

World-famous designers have always drawn inspiration from traditional folklore, handicrafts and architecture. We are certain that Papua New Guinean designers will discover something new and feel equally inspired by the exhibition ‘Russia and Papua New Guinea. Unity in Diversity’ and the fashion show featuring traditional Russian costumes at the PNG Fashion Week.

Director of PNG Fashion Week Philma Kelegai says that there are a lot of similarities between Russia and Papua New Guinea. She is looking for building synergy relationships between our countries as a founder of PNG Fashion platform in the future.

To learn more about the project, please visit the National Library website page dedicated to the event: https://mikluho-maclay.ru/en/russian-and-papua-new-guinea-unity-in-diversity/