A team led by Nickolay Miklouho-Maclay, the nephew of the famous Russian Explorer (of the same name who first visited PNG in1871-1872) arrived in PNG on Saturday 16 September and was welcomed by Sir Peter Barter who took them aboard the Kalibobo Spirit to Gorendu Village in Constantine Harbour in Astrolabe Bay in the Rai Coast District of Madang. Maclay later visited Madang in 1876 and in 1877-1876, his last visit was in 1883 when he spent just a few days, in total he spent almost 3 years at Gorendu Village on the Rai Coast. 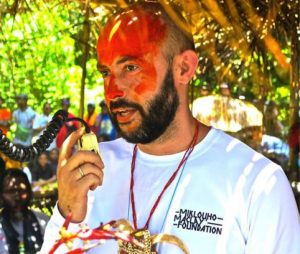 They were welcomed by the descendants of Kui, the Kukurai of Gorendu who in 1871 looked after Maclay on his arrival aboard the Russian Frigate “Vitiaz” and remained there until 1873 with several more visits during which time he undertook some serious research on the culture, art and left a credible image on the people. Today many Russian words remain a part of the ‘ples tok’, not least the name of Rai Coast which is an adaption of Maclay Coast meaning “Paradise” in Russian. Further reminders of his visit can be seen in the diary he kept and was published by KPI, the name of Alexishafen which was named after a member of the Czar’s Family and another Frigate that visited PNG called the “Alexis” and the Vitiaz Straits.

The German New Guinea Company was established on the credibility of Maclay and the Madang township and nearby land was bartered by a Hungarian broker with not much more than a few axes and salt leaving the Madang land largely unpaid for by the Germans, English, Japanese and Australian administrations which placed it in the too hard basket where it still remains today. 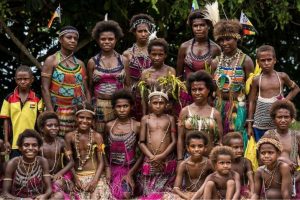 Maclay being welcomed at Gorenu

Maclay was fiercely opposed to colonization himself and with the support of Reverend Chalmers plotted to prevent New Guinea being colonised by the Dutch, British and Germans without success.

During his time in Australia, he married Margaret Robertson, the daughter of the Prime Minister of NSW before Federation and she eventually relocate to Russia with her two children. Later on, she returned to Sydney and the eldest Son William (Bill) became the newsreader on the ABC radio prior to television – his name was synonymous with ABC and spoke impeccable English. 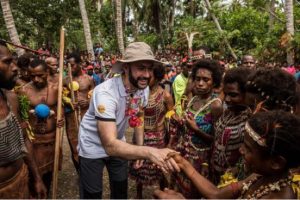 Maclay meeting the people of Goredu

On Maclay visit on 16 September 2017 he was met by thousands of Raicoast people who made him and his team consisting of Nickolay Miklouho-Maclay, Dmitri Sharomov, Igor Chininov & Arina Lebedeva welcome. They remained at Gorendu until 20 September when a further celebration was held to mark the 146th Anniversary of Maclay’s arrival in Gorendu. Again hundreds of people from surrounding villages performed dancers, dramas for visitors including the Grand Chief Sir Michael Somare and Sir Peter Barter.

Later in the day with the help of Telikom\ and the Melanesian Tourist Services (MTS) IT staff, a live telecast took place from Gorendu Village through TASS the Russian Media consortium and most Government and private television stations in Russia where the young Maclay introduced Grand Chief Sir Michael Somare and Sir Peter to an estimated audience of more than 40million viewers and the response was amazing. The first telecast began at 4pm local time and the last telecast concluded at 11pm aboard the Kalibobo Spirit.

Sir Michael spoke of the Governments policy ‘friends to all nations, enemy to none» and that as PNG’s first Prime Minister he had accepted formal relations with Russia immediately after Independence in 16 September 1975. 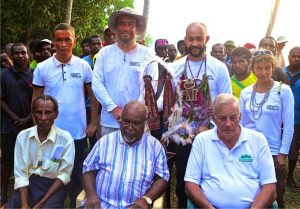 He spoke of the need for us to work together with all nations including Russia and was enthusiastic about the event taking place to welcome the Maclay team to PNG. He emphasised that PNG had united the country consisting of over 860 tribal groups and established both local and provincial governments to make PNG a truly democratic country during the time that he had served as Prime

Minister & Governor of the East Sepik Province. until he retired from politics this year making him the oldest and most senior Member of Parliament in the Commonwealth

Sir Michael restated the need to use today as a day to re-establish good relationship with the Russian Federation and hoped many Russians would visit PNG to see this amazing country, meet the people and enjoy the many places to visit including the Sepik River.. 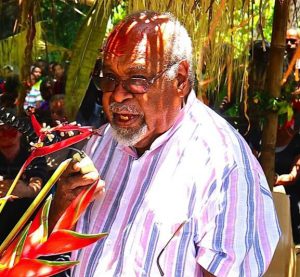 Sir Peter was asked about tourism and assured the viewers in Russia that visits to Raikos, Gorendu and most parts of PNG was perfectly safe and they would be made welcome to visit PNG and witness what can only be describved as the most exciting destination in the Pacific.

He went onto say that he was having discussions with the Maclay Foundation to see if funding could be organised to construct a guest house to be owned by the people of Gorendu and initially managed by the Madang Resort until they had trained staff to take care of guests. He said with the help of another Russian couple Irma and Valeri Sourin and the Melanesian Foundation thay had built a seawall to prevent the site of Maclay’s house falling tinto the sea. A small elementary school had been built and it was also possible that a double class room could be funded by Russia and a small fishing project.. 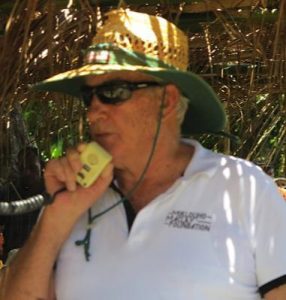 A letter was received from the Russian Ambassador Mikhail GALUZIN which congratulated the Maclay and Melanesian Foundation for the work they had done to preserve the work of Nikolay Miklouho-Maclay and Miklouho-Maclay Foundation and assured the people of Gorendu and PNG of the willingmess for Russia to help develop PNG.

The Maclay group returned to Madang and are staying at the Madang Resort until 24 September, during which time they will visit DWU and speak to academic and students, visit Bilbil Village, the Madang Haus Tumbuna and Alexishafen guided by Stepan, a young Seminarian from Siberia who has played a major role in communication as he speaks fluent Russia, English and Tok Pisin and has assisted enourmously with the organisation of the program in Madang and Gorendu Village.

On Sunday 24 September, the Maclay Team will fly to Port Moresby where a program has been organised by Jim Robbins of UPNG to visit the National Museum and and speak to students at UPNG.

They leave on 26 September for Sydney and continue to Melbourne where they will meet with Maclay’s distant relations living in Australia.