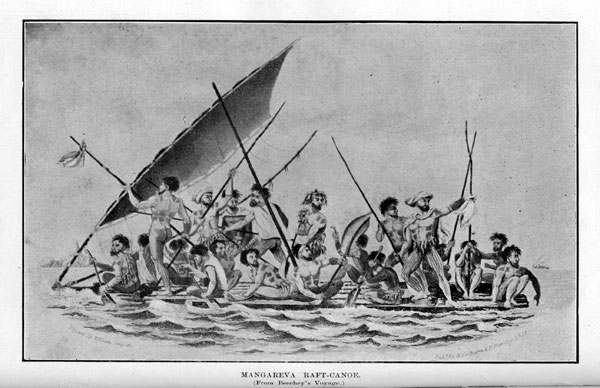 Mangareva Islands got inhabited by Polynesians in about 1000 A. D. Until about 1400 A.D., on Mangareva, there was the center of the exchange system connecting the archipelago with the Henderson and Pitcairn Islands. The first contact with Europeans (the British) took place in 1797, when N. N. Miklouho-Maclay visited the Mangareva Islands in 1871. For 4 days that the Russian scientist spent on the coast, he managed to collect a very interesting material on the physical anthropology of Mangareva.

The main food source is agriculture and fishing. Main crops: coconut, breadfruit, taro, bananas, sugarcane, sweet potato. There was no livestock in Mangareva until the visits of Europeans. Large rafts were used as water vehicles. Tattoo art was highly developed. Tapa manufacture. Ritual cannibalism was practiced.

Ramige is the basis of social organization. The society was divided into the nobility and the commoners (urumanu). Aristocracy consisted of three categories: togoiti, akariki, momomomo. Mythology and folklore were highly developed.