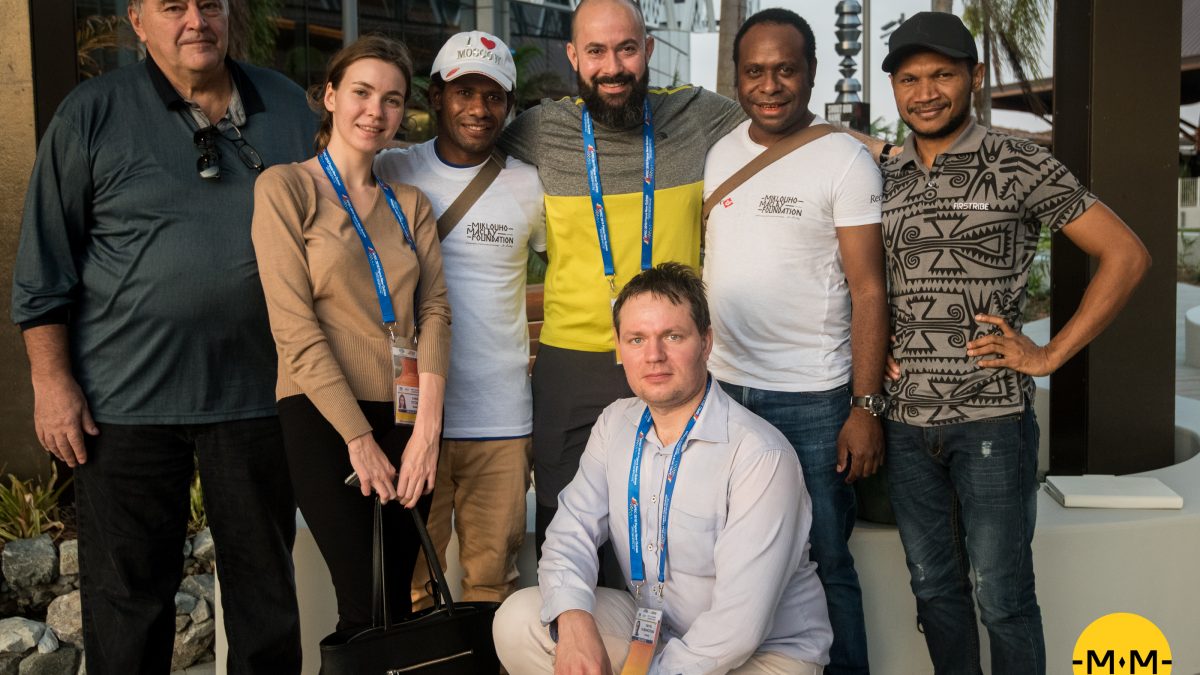 The first day.
United team of professionals of Foundation set off to Papua New Guinea, for holding planned earlier cultural events, which is historically united people of our countries, during APEC summit, that will be from 12th to 18th of November in the capital called Port Morseby. Received an accreditation as members of Russian delegation (it should be mentioned, we came first) experts of Foundation headed by Nickolay Miklouho-Maclay except planned meetings brought gifts to the partners of Foundation, which is weight about 200 kg. It was not so easy to transfer it to destination.
Nickolay Miklouho-Maclay has attracted attention of Russian delegates on the board of plane: the head of Foundation gave memorable editions about his expedition to Papua New Guinea and prepared to the first meeting by telling about modern culture and habits of citizens.
On landing team was warmly welcomed by locals, who is actively finishing the last preparation to APEC. And the most important is that our participants have meet Michael, Russel and Midelit, who themselves recently returned from a trip to Russia at the invitation of the Foundation with the support of the Foreign Ministry and Rossotrudnichestvo under the program of the President of the Russian Federation “New Generation”. New friends of the Foundation actively helped the team to assimilate on the spot and successfully accommodate.
Tomorrow is a new day and great plans!
#APECPNG #maclayexpedition #papuanewgiunee #miklouhomaclay #maclayfoundation

Today, the Foundation team had a productive day, meeting with partners.

Paul Barker, director of the Institute of Internal Affairs, gave a brief background on business contacts. The conversation was helpful and it’s possible to say that both sides are interested in cooperation and interaction with each other. Having found common points of contact, as well as having discussed the difficulties that will have to face at the moment, the parties warmly said goodbye, having agreed to meet again at the opening of the exhibition organized by the Foundation and the National Library of Papua New Guinea.

The second meeting was no less important, although it dealt with more cultural issues. Especially for the Foundation, the Director General of the National Library of Papua New Guinea has set aside time on his day off to discuss future plans. In addition to the agreements that you will learn about later, we are pleased to announce that a corner of Russia will open in the National Library with the support of the Foundation! The American side already has its own corner, but library representatives are very interested in promoting Russia and knowledge of this country in Papua New Guinea in all provinces and regions.

Well, the completion of the first working day was quite pleasant. Midelit and Michael, members of the first PNG delegation to Russia, conducted an excursion for our group. The team managed to see how the locals spend the weekend: playing rugby, going to the beach, running around and enjoying life. By the way, the head of the team, Nickolay Miklouho-Maclay, noted that the capital had changed a lot, and where the ordinary beach was a year ago, a beautiful and spacious embankment appeared, the crown of which was the main APEC site.

We visited the PNG National Library, where we participated in a meeting of top managers headed by the general director. One of the main issues discussed at the meeting was the possibility of translating Miklouho-Maclay diaries into English. Also once again, a great desire was expressed by PNG citizens to learn Russian.

Then there was a visit to the University of Papua New Guinea, where a business meeting was held with Jim Robinson, head of public relations. He actively supported our initiatives for the exhibition “Miklouho-Maclay 21st Century. History revived” and screening as part of the education the film “ Citizen of the World ”

There are days when organizational issues of great importance occupy most of the time.

Nevertheless, the team of the Foundation successfully prepared two sites for the exhibitions “Miklouho-Maclay. XXI Century. History revived”. We also visited the National Library, where we worked out in detail the program of tomorrow’s grand event.

The end of the day was spent in productive work with communication moments, namely, establishing new contacts with potential partners of the Miklouho-Maclay Foundation.

On 14th of November 2018, the unique event was hold in the National Library of
Papua New Guinea, which made the cooperation between citizens of our country in
sphere of culture and education – the grand opening of the exhibition “Miklouho-
Maclay. XXI century. History revived”, which was prepared by Miklouho-Maclay
Foundation for the Preservation of Ethnocultural Heritage with the support of
Presidential grant Foundation of Russian federation and partners of Miklouho-
Maclay Foundation.
The opening was attended by representatives of the Russian delegation at the
APEC Summit 2018 Guests were welcomed by Valery Sorokin, Ambassador at
Large of the Russian Foreign Ministry, a senior official at the APEC Summit, who
was pleasantly impressed by the exhibition he saw and noted that this is a great
start of for the development of sustainable relations between our countries in the
field of culture and education.
Читать подробности дня

A busy day for the Foundation team began with a pleasant news: one of the most famous newspapers in Papua New Guinea «National Weekender» published an article about a visit to a delegation from the PNG of our country. Jim Robinson, a representative of the University of Papua New Guinea, who actively contributes to the activities of the Foundation, conveyed the good news.

Then Nickolay Miklouho-Maclay and his team went to the ministerial meeting at the International Convention Center, which takes place within the framework of the APEC summit. Now Papua New Guinea is the attraction of influential politicians from 21 economies, which are located in the Asia-Pacific region. Our Foundation is sincerely pleased that Papua New Guinea is hosting such a significant event on its territory.

The APEC Summit, which takes place in Papua New Guinea, is coming to its climax!

Today, Nickolay Miklouho-Maclay, with the team and Michael, a member of the PNG delegation who visited Russia, conducted a tour for Russian TV channels around the capital Port Moresby. After a short trip along the new embankment, built specially for the summit, the group visited a local village. The settlement, which is located near the fish market on the embankment, happily received guests from Russia. Local residents warmly greeted the reporters and the team of the Foundation, showing their own homes and their evening entertainment. It is worth noting that today for the residents of Port Moresby announced a national holiday in honor of the APEC summit. Children sang songs, residents gave interviews and talked about local life. Everyone was delighted with this trip, as it was a great immersion in the life of the people of Papua New Guinea!

The Foundation team today acted as experts on Papua New Guinea for Alexey Medvedev, the deputy minister of higher education and science. We showed the honorary guest the National Library, where we were warmly welcomed by the staffs and conducted a tour of the recently opened exhibition “Miklouho-Maclay. XXI Century. History revived”, showed the place, which will be the “Russian Corner”, and also made a comparison to the “American Corner”.

Then Alexey Medvedev and the team were waited by a no less warm reception at the University of Papua New Guinea: a meeting was held with the acting Rector, Vice-Rector for Academic and Head of Public Relations and Event Management. We discussed the prospects of teaching students from PNG in Russia, increasing quotas for scholarships for Papuan-Guineans and the development of distance learning. As a result, it was decided to formally apply to the Mikluho-Maclay Foundation to assist in the interaction with Russian institutions of higher education.

Memorandum and agreements signing ceremony was held on November 18, 2018 at the Hilton hotel, which is the residence of the Russian delegation at the APEC summit in Port Moresby, Papua New Guinea. Honorary guests of the ceremony were: Lyudmila Vorobieva, Ambassador of the independent state of Papua New Guinea and the Russian Federation to the Republic of Indonesia; Alexey Medvedev, Deputy Minister of science and higher education of the Russian Federation; Sergey Pokhilko, the head of the Department of international cooperation of the Russian Federation government. The signing ceremony consisted of several parts. The first part was the signing of memorandum and agreement with the University of Papua New Guinea, which was represented by Jim Robbins, the head of public relations and events. In a solemn atmosphere Nickolay Miklouho-Maclay, the founder and Director of the Miklouho-Maclay Foundation, and Jim Robbins signed a memorandum of gratuitous transfer of rights for broadcasting and distribution within the territory of the independent state of Papua New Guinea two documentaries «Citizen of the world» and «THE MAN FROM THE MOON» for educational purposes. An agreement for distribution of the book «Journey to Maclay Coast» was signed as well. Mikluho-Maclay Foundation and Divine Word University representatives signed another memorandum of cooperation and support for the scientific research expedition to the Maclay Coast (Rai coast). The final and the most important memorandum became a signing tripartite agreement between the National Library of Russia and the National Library and Archive of Papua New Guinea with the assistance of Miklouho-Maclay Foundation. The agreement was signed by Kakito Cassi, the General Director of the National Library of Papua New Guinea, on the one hand, and Nickolay Miklouho-Maclay, on the other, and assumes long-term cooperation between the parties. At the end of the official ceremony the participants were given the books «Journey to Maclay Coast» as a gift, took some memorable photos as well as gave interviews for Russia and Papua New Guinea press.