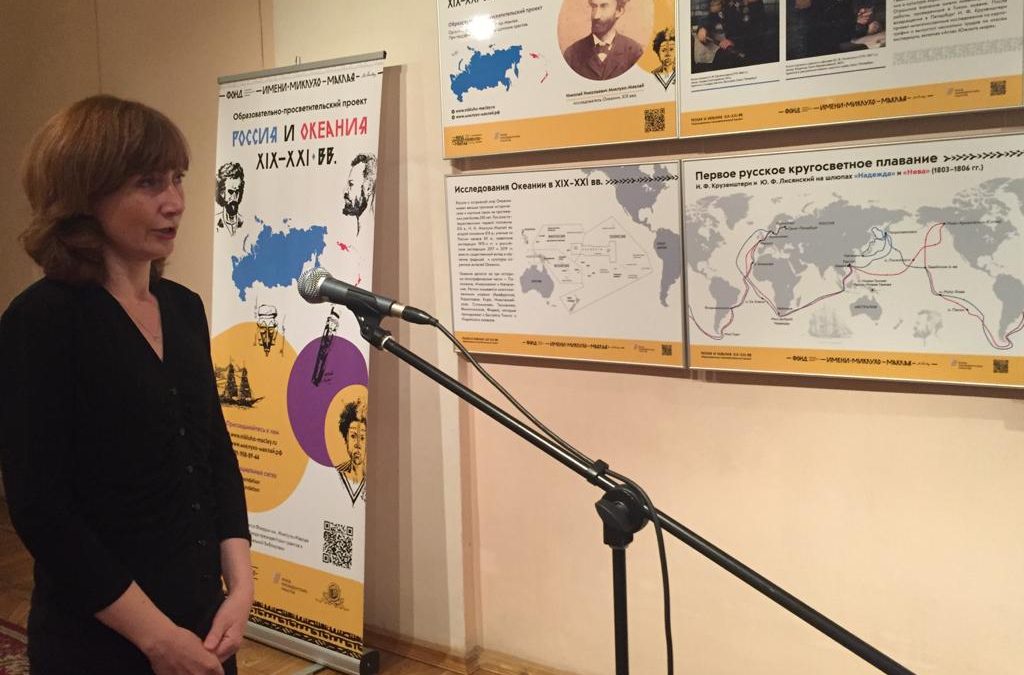 This exhibition tells about the research and discoveries of Russian travelers and scientists in XIX-XX-XXI centuries, such as N.N. Miklouho-Maclay, I.F. Kruzenshtern, F.F. Bellingshausen, M.P. Lazarev and many others. The exhibition consists of the copies of original materials from the State Archives and Museums of Saint-Petersburg and Moscow, which testify to the achievements of Russian scientists and travelers in the South Seas region.

Tihonova Elena Valeryevna, Deputy General Director of the National Library of Russia, gave an opening speech at the exhibition opening event, noting the importance of such projects.

It should be noted that it was announced at the opening event about a contest “Oceania Travelers” created as a part of the project “Russia and Oceania (XIX-XXI centuries)” for participation of pupils and teachers of Saint-Petersburg, which will be active throughout the academic year.

Zholud Evgeniya Andreevna, a representative of the Miklouho-Maclay Foundation told that a large team, including scientists from Moscow and Saint-Petersburg, was involved in the project creation process, and expressed confidence in that the educational project “Russia and Oceania (XIX-XXI centuries)” will become a source useful for the next generations.

Pale Sophia Evgenievna, candidate of Historical Sciences, research fellow at the South-East Asia, Australia and Oceania Studies Center of the Institute of Oriental Studies RAS, made final remarks at the end of the opening event making an emphasis on the uniqueness and relevance of the project not only for youth but also for scientists, and gave a little tour around which would be given to every visitor of the exhibition.

We remind that tomorrow, at 18:30, Sophia Evgenievna will give a fascinating lecture “The first voyage around the world of I.F. Kruzenshtern and Y.F. Lisianskii (1803-1806)”- the first of a series of lectures of the project “Russia and Oceania (XIX-XXI centuries)” at the address: National Library of Russia, Sadovaya street, 18, 2nd floor, conference hall, entrance from Sadovaya street through the entrance “Direktsiya”. Enter is allowed to library card holders!

On the participation in the project, please contact us any convenient way:

Link to the project “Russia and Oceania (XIX-XXI centuries)”: https://mikluho-maclay.ru/en/russia-and-oceania-in-the-xix-xxi-centuries/