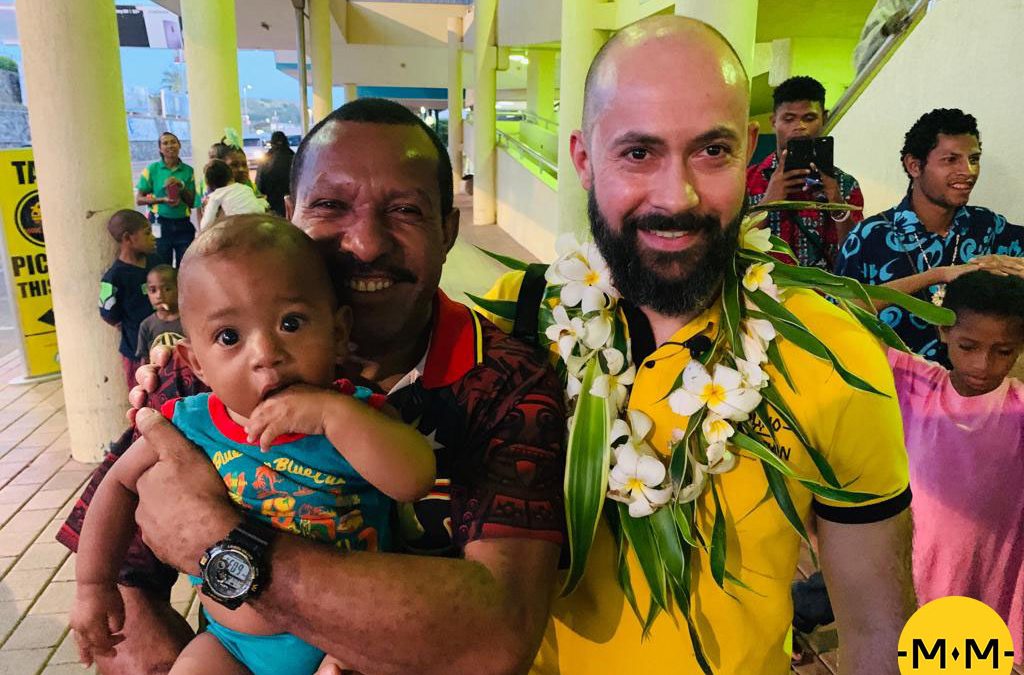 We asked a few questions the President and founder of the Foundation, Mr. Jack Madab Simbou, a native of Gumbu village, who was teaching as tutor for Social Works at the Humanities Department of the University of Papua New Guinea and also in a number of High Schools in 1990-1995. In 1998-1999, after getting Master’s Degree at the University of Canberra, Australia, Jack became Lecturer at the Divine Word University in Madang, Papua New Guinea. In 2000-2019, for 19 years now, Jack Madab Simbou worked for Government of Papua New Guinea in the National Department for Community Development & Religion.

Tell us, please, what was the reason to set up the Nicholai Miklouho Maklai Foundation Inc in PNG?

It should be noted that the historical presence of Russians in Papua New Guinea was restored after a long break of more than forty years (Soviet expeditions of the RAS (Russian Academy of Sciences) took place in 1971-1977) due to the Miklouho-Maclay Foundation and its Director, a descendant and full namesake of the Great traveler, who organized and financed, together with partners, two research expeditions with a team of the RAS scientists from Saint-Petersburg and Moscow.

It is valuable that the study of the Pacific region and, first of all, of the Maclay Coast (North-East of New Guinea), continues by the Russian scientists, which was started by the Great Miklouho-Maclay, who discovered the Maclay Coast to the whole world in XIX century.

Why the Foundation is named after N.N. Miklouho-Maclay?

The reason is we, from Gorendu, Gumbu and Bongu villages, are very proud of our history with N.N. Miklouho-Maclay. Miklouho-Maclay Sr. has done a great deal for my ancestors of the Maclay Coast, and I must do something to preserve his name and history for our future generations.

After reading the Great traveler’s book in details and seeing his drawings and pictures of our own bloodline ancestors, we see N.N. Miklouho-Maclay as a very important part of our people’s lives and history. In addition, we named the Foundation after N.N. Miklouho-Maclay because he is very famous in Madang Province and in the Maclay Coast. He is a very important “Tamo Boro” (in the local Bongu language – “a very big man”) in the history of Papua New Guinea.

There is also a very important fact that we want to show Russia that we respect and honor and love that Russian for being the first European to come to our land, the North-East of the New Guinea Island, and bring corn, water mellon, beans to improve the health and wellbeing of our people.

Tell us, please, about the Foundation structure.

Now we appeal to respected public figures and businessmen in Madang province and Papua New Guinea to be on the Board of Trustees and Advisory of the Foundation. The key partners: Miklouho-Maclay Foundation (Russia), Madang Resort Hotel, PNG Government and Churches, the Chiefs of the Gorendu, Gumbu and Bongu Clans. We also see the Divine Word University as a key partner for research and NBC, Radio Madang, The National News Paper and The Post Courier News Paper, NBC TV, and other TV Channels for publicity.

What are the first Foundation projects planned in PNG?

The first one is building a good office for the Foundation in Port Moresby or Madang. The second one is to carry out a major fundraising drive to set up sound financial basis for the Foundation to spearhead other events and activities. We also have plans to allocate land in the village on the Maclay Coast for the N.N. Miklouho-Maclay Centre. This Centre will have about 2 hectares of land given solely to the Foundation. A small Museum, a Sports Hall, a Business Trading hub, and a Meeting or Conference Hall will be build on this land.

Is there, among the Foundation members, any descendant of Tui – the first local resident who met N. N. Miklouho-Maclay in XIX century?

Mr Assel Toiya and his sons Kaisek Toiya and Tui Toiya are from the Gorendu Clan who are descendants of Tui. We also have Councillors Gamang Kamu,  Egu Gasom Kamu, and Bonem Gasom Kamu who are descendants from the same family tree of Tui, however, they run their own tourist business in Garagasi, where the Memorial of N.N.Miklouho-Maclay is located. Not to forget that I, Jack Madab Simbou, am also a descendant of Tui from his mother’s side. Supporting traditions, I consider it my responsibility to set up the Nicholai Miklouho Maklai Foundation Inc.

What kind of cooperation is planned between Russia and Papua New Guinea?

Is there support from the PNG Government?

Yes, there was support given by the Head of the Department for Community Development, Ms Anna Solomon. We will also appeal to the National Agencies and Statutory Bodies to support the Foundation. The work done by the Miklouho-Maclay Foundation Director, Nickolay Miklouho-Maclay, will really help the new Foundation to create further awareness and strengthen working relationships.

We thank Mr Jack Madab Simbou, the President of the Nicholai Miklouho Maklai Foundation Inc in Papua New Guinea for the interview given to the Miklouho-Maclay Foundation Press Office and wish productive cooperation in all areas!

On the photo: Jack Simbou with his son Maclay, named in honor of the first in the contemporary history of Russia research expedition “Miklouho-Maclay XXI century. Maclay Coast” 2017 to Papua New Guinea, and Nickolay Miklouho-Maclay. It should be noted that giving a child the name Maclay is an old tradition preserved to the present day.