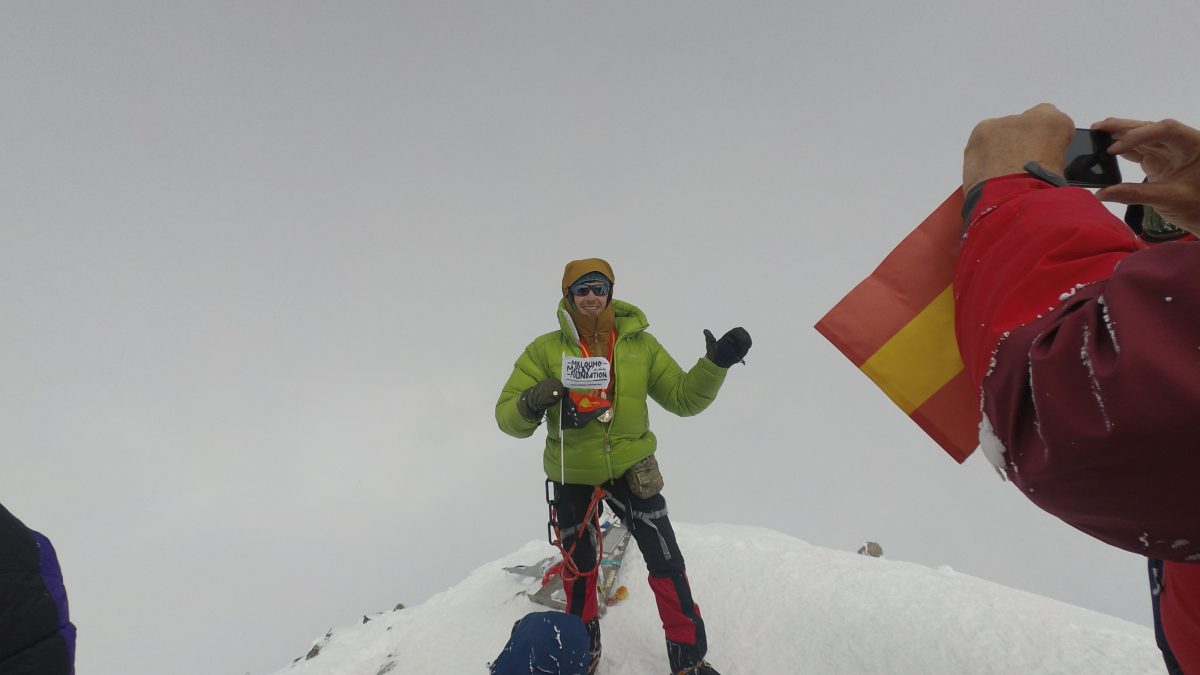 On June 23, 2019 the flag of a distant country, Papua New Guinea, was erected at the highest peak of Russia and Europe by Yuri Emaykin, a successful businessman and a true friend of the Miklouho-Maclay Foundation.

Yuri Emaykin ascended the summit of 5642 meters twice. And the second time he had a special sense and a purpose, which helped him  overcome all the difficulties of a very difficult route. Who is this original man, and why did he decide to erect on the highest peak of Russia the flag of distant Papua New Guinea, the country of any Soviet boy’s dreams? We asked Yuri Mikhailovich Emaykin.

– Yuri Mikhailovich, please tell us a little about yourself and why you decided to erect the flag on top of Mountain Elbrus.

I will tell short about me: I was born in 1969 in Leningrad, studied in Leningrad, and then in Saint-Petersburg, then served in the Soviet army. When I got out of the army, I worked as a broker at the stock exchange and in 1994, two of my companions and I organized the investment company: “Lenmontazhstroy”. The company is 25 years old this year, all three founders continue working in it, and the company is still successfully developing. Since 1994 my whole life is about this company. I am married, and we have three children: 10, 8 and 5 years old. As a hobby, I am a fan  of historical reconstruction; I am the founder of the  Historical Military Club of the French Artillery of Napoleon’s time; and downhill skiing.

– You have such different hobbies. And you do mountaineering to?

I am fond of mountain tourism. I like to walk in the mountains, I like any kind of travel: walking, sailing… so, any kind. This is my life – always in motion.

– And why the flag of Papua New Guinea?

Why the flag? My friends and I have already ascended this summit eleven years ago. This time my friend invited me to his team, and I accepted. But one should always fill the life with purpose. You need a goal to make it easier to go. I set myself several goals and the flag on top was one of them.

It all started from the moment when I met Nickolai Miklouho-Maclay, the descendant of the famous Russian traveler and humanist, and heard his extraordinary story, which became a continuation of the history of almost 150 years. It turns out that they still remember Russia on that distant island, and the Miklouho-Maclay Foundation has plans and projects for more than one life. I could not pass by, I wanted to become a part of this important case of enlightenment among the Russians in the field of History and Geography, to participate in the research expeditions led by Miklouho-Maclay in PNG, reviving Russian research activity in Oceania. Only a year ago we started to support the projects of the Foundation, but the projects seem to be enough for five years. With heart and soul, we have already made a lot for it.

And my idea was that Papua New Guinea is a distant place from Russia, and, for the people of Papua, Russia is also very far and even unreachable. Elbrus is the highest peak in Europe and unreachable. I felt that it would be very nice for the residents of PNG if the flag of their country would be erected on top of it. And the flag was erected on June 23, 2019. So, it happened, and it was very exciting to erect it on top, so that the people of Papua New Guinea knew and rejoiced that the people of Russia remember them and do something in their honor.

– Please, tell us more about your acquaintance with present Nickolay Miklouho-Maclay.

I know Nickolay Nikolayevich Jr. for two years. We met at one of the reception events, where he was invited by our mutual friend. The event began, I was introduced to him, and Nickolay began to tell something and an hour and a half later my wife said to me: “Sorry, dear, but you fell deep into his speech”. And from that moment it all had begun. After a few months we started helping the Foundation, working on a common case. It was not only for charity, but a systematic process – participation in common project.

– Were the main ideas of the Miklouho-Maclay Foundation close to you?

With no doubt, I share the ideas of Nickolay, both Senior and Junior. I always liked people who, despite of stereotypes and social dogmas, try to convey things that are obvious to us. In addition, it is a journey to the unknown place of the planet, which I hope to visit this Autumn.

– Is there a necessity today in such ascetics as Miklouho-Maclay Jr.? What do you think?

The answer is obvious – I support what he does.

– In what role do you see yourself in the process of revival of ideas and memory about the amazing history of the Great Russian traveler?

Now we are working on the creation of a business project, partially  consulting. The goal is to attract Russian business to cooperation with PNG. The Foundation provided consulting services, and thus lived and worked for science, not at the expense of charity. One can give a man a fish or a rod, and the second one will be much more effective. Pragmatic businessmen pay for useful consulting services, communication services in interaction with local authorities, local business and now, Nickolay and the other members of the Foundation, who are engaged in this work together with him, are well informed about PNG. In particular, these are my employees, chief analysts of the company. One of them has already visited PNG twice and got not only cultural experience, but also an experience in the field of business and finance of the Country. I think today he is the main specialist in Russia in these areas of Papua New Guinea. He can give a consultation on what is going on in almost any industry in PNG.

– Of course, the project is not only practical, but very emotional. Do you have dreams related to this project?

This is a very good chance for Russia and PNG, no matter how trite it may sound. Nickolay Nikolaevich had a dream to create a Russian village on the Island, so that national and intercultural communication would appear. In fact, this idea has good prospects. Oddly enough, a lot brings us together.

One evening, during the stay of a group from the University of PNG, we talked about life, about everyday life. And there was a conversation that, coming to the home country in Russia, we work in the garden and go picking mushrooms and berries. The guests became amused hearing this, and they told us that, coming to their village, they also work in the garden and go into the forest to pick something. We have blueberries, and they have exotic fruits – that’s the difference.

Later, when a pig was served on a platter, they were delighted – this is their national dish as ours. Literally, this is their tradition to serve a pig for a festival. And there are a lot of such cases. For example, some time ago, we sent a group of geologists to them. They stayed in a village and lived with the locals in one hut and when they were about to leave, the villagers said: “You Russians, are so cool. You slept with us under the same roof. No Australian or Englishman would ever think about  that».

Mentally we are close in many ways. The people of Papua New Guinea are absolutely not spoiled by civilization. The relationship between people is their main value, keeping the word is the law,  us here in Russia are not completely spoiled by civilization and we have a lot to learn from them. I would like our people to be perceived there as a people close spiritually and if we have not only cultural, but also business ties, that are able to promote and develop our relationship, the dream will have a chance to become a reality!